He’s been quite a popular troubadour for many years, creating a precious and intimate atmosphere on festivals, parties, official receptions, etc. with his extended repertoire. He tirelessly travels around the Netherlands and Europe, singing songs – some self composed – and making his hosts happy, acoording to the many dozens of enthusiast comments on his website.

Now Jan van Til “Chantelavie” is a very cool sponsor of Cool Down the Planet. He adopted Timoteo Alfredo’s report about the city of Beira in Mozambique, recovering from cyclone Idai. Thank you very much Jan! 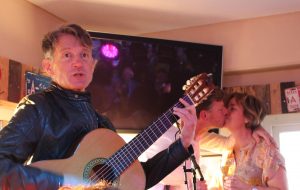 A short interview with Jan van Til:

How do you regard the problem of ‘climate change’?
Climate change is not an issue, it`s a gigantic problem that will last for generations. Denying the climate change is an act of cowardice. We are all involved, we are all accountable, we are all responsible. Especially people from the rich countries. At the same time climate change also offers opportunities: speeding up new technologies, breaking with the oil lobby, discovering new worlds that will arise with the melting of the poles and the permafrost, to name some.

What’s worrying you most?
What worries me the most is the socio-economic impact of CC on civilians and on the geo-political constellation. How will civilians react once they will be forced to contribute to climate improvements? How can poor countries subsist once confronted with huge damages as a result from CC? How will the world powers react on emerging new land and sea from the poles and the permafrost?

Do you have any idea what kind of ‘coolest solution’ mankind could help?
Jan: My layman`s solution for the CC: empowering private gardens and land properties all around the world for capturing carbon dioxide.

How do you – small scale – add to the remedy yourself?
My contribution? I like the question, because it incites me to think actively about a solution. But I am not a scientist. I really think the solution must and will come from science, from technological innovations. The first step, though, must be the political readiness to act. Solutions for a better climate are already on the road. The emerging market of electrical cars is a good example. Other necessities: the transitions to environment-friendly power plants, off shore transport, aviation..
My (very small) solution is contributing to the awareness of the need to respond to the urgent situation.

Your organization as one of the coolest?

Join us Delft University of Technology has taken the lead in supporting this platform. It has facilitated Cool Down the Planet by giving valuable feedback on various issues and some…

Get to know this ambassador

One of the Coolest Universities:
TU Delft

A few good reasons to call Delft University of Technology one of the Coolest Universities: 1)  A significant proportion of TU Delft research relates to sustainable development, including many publications…

Get to know this ambassador
Login
Forgot password
Register